Lottie was originally fitted with a Proctor mast that was larger in section and much heavier than the standard Trident mast.  It weighed twice as much as other Trident masts.  This seemed to increase her tenderness (propensity to heel over).  When sections were compared,  it was found to be approximately the same dimensions as a Westerly Centaur mast though the 26-foot Centaur weighs 25% more, has 40% more ballast and 20% greater sail area.  For this reason, we decided to replace the mast with one of lighter weight though it proved impossible to source a mast built to the  original Trident specification. We also wanted to make mast raising and lowering easier by fitting a tabernacle.

The Proctor mast was stepped on an inverted T-shaped  foot plate with a pivoting heel which, combined with the excess weight aloft, made lowering the mast by hand quite precarious compared with a lighter tabernacle-mounted Trident mast.

It meant there was little side-to-side support and stability when raising and lowering the mast. And because the pivot was at the bottom  of the mast,  the central balance point of the lowered mast was well beyond the stern once it was lowered.

When the lowered mast was  supported at the stern with a mast crutch, so much overhung beyond the stern that removing the pivot pin could be quite exciting.The mast also hit the raised doghouse when lowering.

Trident masts usually pivot well above the deck in a tabernacle.  This puts the balance point of the mast (round about the spreaders) at the stern of the boat when lowered and more or less balanced when supported there by a mast crutch.

In addition, the mast foot lacked the fore and aft stiffening steel bars which normally spread the downward thrust of the mast over the twin bulkheads below on a Trident ( left). As a result the grp beneath the mast foot showed signs of crushing. A pair of 50mm stainless steel angle bars were added under the alloy mast foot (right – click to enlarge).

In 2006 her pear-section Kemp mast was replaced with a modern-section , lighter weight Z-Spars mast and boom (Z230 section).  The new mast was mounted in a  stainless steel tabernacle.  This was again  mounted on the longitudinal 50mm stainless steel angle to spread the downward loads fore and aft over the bulkheads below.

To reduce the weight aloft further, the opportunity was taken to convert Lottie to masthead rig instead of the usual 7/8ths rig, thus dispensing with with jumper struts and diamond stays.  This required the Facnor roller-reefing spar  fitted in 2004 to be extended. So far the genoa luff has not been increased in length to match this as this would require a new sail. 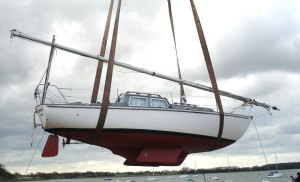 The 32 foot mast is quite a lot longer than Lottie

Instead, a rope strop is used above the sail to enable the furling swivel to be hoisted almost to the mast head (as recommended). 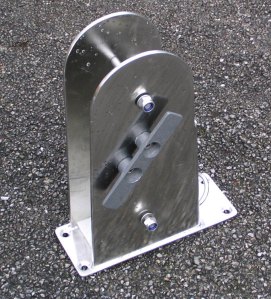 A stainless steel fairlead is set a little way down the mast from the top to discourage the genoa halyard from getting wrapped round the spar when reefing.

You can see my crude but cheap A-frame for lowering the mast here.

I just attach the base of the A-frame to the forward lower chain plate U-bolts with 5mm cord and attach the genoa halyard to the apex.  One end of the main halyard is attached to the stemhead fitting and the other to the apex of the A-frame to allow me to haul the mast up or lower it gently onto a wooden X-shaped crutch positioned as far aft as possible.   It is important to position the cructh above the cross trees or the mast will tip up when you remove the pivot bolt from the tabernacle.