This is thought to be caused by water penetrating between the hull and the deck mouldings.  Since the joint in these mouldings is glassed over inside all round after the bulkheads have been glassed in, the only place such water can go is into the end grain of the bulkhead plywood.

Rot in the plywood and detatchment of the grp was found in the forward bulkhead between the toilet and the forecabin.  This is described in the Foc’sle section. 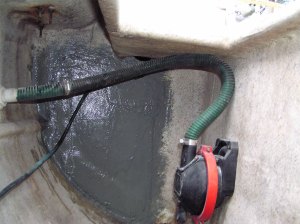 Repairs to the aft bulkhead in starboard locker

Similar delamination was also found in the plywood bulkhead between the starboard cockpit  and  aft lockers (shown here).   The rotten plywood was chopped out with an old chisel back to sound wood and then layers of grp used to replace the material removed and to rebond the bulkhead to the hull. Mostly chopped strand mat was used but as can be seen from the photographs, a few bits of heavy woven rovings found discarded in the yard skip were also put to good use in this out of sight area.  The final coatings were pigmented as the epoxy resin that had been used is reportedly susceptible to deteroration when exposed to the  ultra-violet in sunlight. [Click on pictures to see full size]

Bilge pump hose: a new, longer length of hose was run up inside the cockpit coaming before attachment to the skin fitting outlet to prevent water siphoning back into the boat while heeled over.  This may not be strictly necessary if the pump has non-return flap valves but seemed a cheap and sensible precaution.  It is probably more important to do this for electric bilge pumps which often have no inbuilt non-return valves. 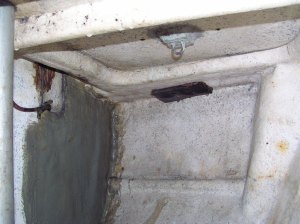 Conversations with the Trident designer, Alan Hill, cast doubts on the seriousness of the risk posed by the deterioration of Trident  bulkheads.  Alan was of the view that Tridents were so heavily built in comparison to later grp vessels that the bulkheads are probably not that crucial to maintaining structural integrity.  Alan pointed out that the later Sabre prototype was  sailed without bulkheads while they determined the final layout of the accommodation below.

The teak capping over the hull and deck joint was removed.  The filler between the two mouldings was found to have the consistency of  sand.  It is presumed this was the result of 30plus years of grinding movement between the two mouldings.  An angle grinder was used to clear a 6-8mm gap between the mouldings and this was filled with epoxy filler before new wooden toe rail capping bedded on Sikoflex was screwed over the joint  with 55mm self tapping screws. This will be described in the Deck section.